Some years ago, having  just returned from the annual Trondheim chamber music festival KAMFEST, I had some thoughts in my head, spurred by the many musical experiences there. KAMFEST has always been one of my favourite festivals in Norway as it always seems to somehow be able to think outside of the Box when it comes to chamber music and concert programming in general. A great mix of Expressions, genres, venues and, most often, superb musicians. That year’s composer in residence was the multi-faceted composer /pianist/poet and artist Lera Auerbach who were participating in all of her artistic roles. The program varied from the music-theatre-opera The Blind, chamber music works where the composer performed herself, poetry recital and a silent auction of some of her pictures.

This combined presentation was a rare experience and I wondered in advance how Auerbach would succeed in filling all of these roles. Through history there have been many examples of great composers who also have ventured into the field of performer; a double role which was much more common in older times, from the improvisation-competitions of Mozart´s time to the semi rock star-hysteria surrounding virtuosi composer-performers like Chopin and Liszt. But that said there are considerable differences between the demands to performers of today as to that of earlier times, both in instrumental changes and technical demands.

Some of the things I experienced with Auerbach concerns the theme of listening in a very profound way, more specifically: it concerns something we might call outer and inner listening.

The projection of emotions

When a musician performs, he or she is experiencing the music emotionally and bodily as well as intellectually and technically. It is easy to get swallowed by the emotions welling up from within when confronted with music by Rachmaninov or Scriabin. We often choose the music we play precisely because it talks so strongly to us. A musician, however, is faced with the responsibility of making not only himself but the audience as well experience these same emotions. That is quite a different thing. 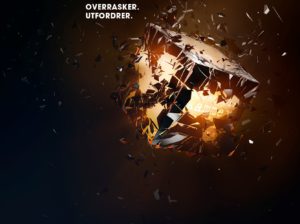 There is a myth going around that says that if you only experience something very strongly yourself, then your experience will somehow automatically spill over onto the people listening to you. Maybe the reason for this idea is the convincing nature of these strong emotional reactions. Often they might get us so involved in our own experience of the music we are playing that we quite forget about the audience.

We might call this process inward listening as the performer is completely absorbed in his or her own emotional reactions to the music. It is a very personal kind of listening which can have a tremendous impact on our lives, creating sometimes a lifelong relationship between the performer and the composer of the music.

A perspective on passion

However, just like a spiritual or religious experience, experiences like these are often highly personal. A performer who aims to communicate with an audience needs to take on a different role. The purpose is not to 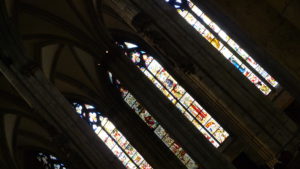 experience for ourselves but to make the audience experience, and in order to do so we need outer listening.

This type of listening is strongly linked with the ability to tear ourselves loose from our own emotions and to be able to observe the sounds we are making from the outside. Just like a pointillist picture needs distance in order to be perceived properly a musical composition needs the all-encompassing perspective of a musician who knows its totality and is able to portion out every last detail according to its place in the sum-total of the work.

When a particular place or harmonic turn in a composition yanks our emotional cords we are naturally turned inwards, listening deeply to our own emotions reacting to the call of the music. In a natural response our emotions are crying for the release of a fortissimo blow-out to match our inner experience but our mind and musicality knows there is more to come and that this part must be balanced against both what has gone before and what is to follow.

When the end is in the beginning 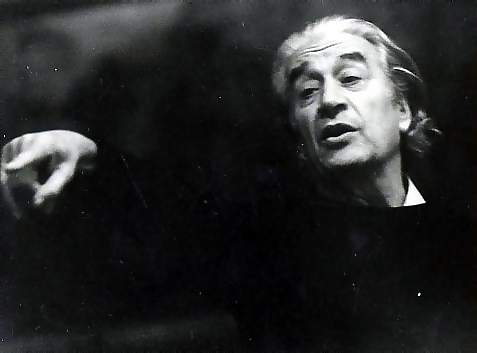 The great Rumenian conductor Sergiu Celibidache adresses this in the following way:

A sequence of tones follows a structure which finally connects the beginning with the end. When do I know that a piece has come to its end? I know it when the end is in the beginning. When the end keeps what the beginning promised. Continuity doesn't mean: to go from one moment to the next, but: after going through many moments to experience timelessness. That is where beginning and end live together: in the now. What is required to experience any structure as a whole? The absolute interrelation between the individual parts. (from the film "You don t do anything. You let it evolve". Produced by Pars Media)

If we choose to simply wallow in our inner bliss while playing we have left the audience behind and are no longer listening to the actual music we are making but only to the one we are experiencing internally. We have also paradoxically lost the sense of "now" in the music which Celibidace talks about.

In the case of Auerbach the word "overwhelmed" seemed essential. In the works where she performed herself this was the essence that she projected as a performer, and I was left with the impression of a performer struggling (but quite ecstatically) with too strong emotions, emotions that were literally choking the music she was performing. Emotions in music shouldn´t be a problem except if the emotions exist solely in the performer and doesn´t extend to the audience.

By retaining our outer listening while we play might actually feel as if we are committing some sort of betrayal, consciously leaving our emotions behind to get about the work of communicating. We fear losing those emotions which the music initially stirred in us.

But what is actually the consequence of failing to make this switch between outer and inner listening?

When Auerbach played her own music I saw only her. She filled every pore of the music with her own experience of it and there was no question about how it made her feel. At the same time it was a lonely experience listening to her playing because I was witnessing a reaction to a music of which I was deprived; the music was happening inside of Auerbach, not on the stage. As a consequence I was presented with a music that lacked in depth and detail. A music where there was no holding back in anticipation of later pleasures, no lines stretching over more than three bars at a time, no delicate differentiating between subtle nuances of tone colour. The elements were all there in the music but they passed by un-noted like an unlit tramcar.

I´m sure it was a great experience, I´m just sorry I didn´t get to hear it.

(This blog-post might seem overly anti-Auerbach which was not my intent, it was just that she provided a chance to adress this topic and illustrated my point to perfection. However, I quite enjoy some of her more symphonic music very much and would encourage everyone to check out her works. )