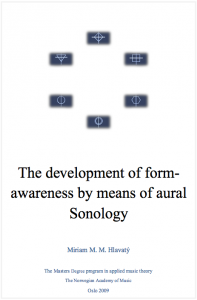 My initial interest in listening and listening intentions started while writing my master thesis at the Conservatory of Music in Oslo where I was introduced to the subject Aural Sonology, developed and taught by the two composers Lasse Thoresen and Olav Anton Tommesen.

This master thesis focuses on form-awareness and investigates why this is an important skill for students aiming at a career as performing musicians. The world-famous composer Wilhelm Fürtwängler once emphasised the importance for any performer to be completely aware of what he or she is "saying" when trying to communicate a message, whether it be music or language and in order to be able to communicate meaning as a musician form-awareness is an essential skill.

The core term of this thesis is "organic form". In short, organic form is a form concept where each musical work is seen as an integrated, organic whole. This means that all the parts of the composition needs to relate to the other parts as the parts of a living organism would relate to each other: changing one effects all the others. This has far-reaching consequences in the field of performative choices as each musical work is a unique universe where we as performers are constantly invoking a multitude of butterfly-effects for each new musical choice we make.

The thesis is based on an analytical system known as aural sonology, which represents a novel approach to the analysis of sonic and structural aspects of music through the aural aspect of music as opposed to the written score. The main goal of the system is to increas aural awareness in the listener terefore a large part of the thesis is concerned with the topic of listening and different kind of theories concerning listening intentions. These subjects can be found under the heading 1.2 Concerning Sonology and Aural Sonology.

The main part of the thesis is given over to a detailed analysis of three compositions: Black Angels by George Crumb, The Lady of Shalott by Bent Sørensen and Solve et Coagula by Rolf wallin.

Towards the end, in the appendix, there is also an interview with each of the three composers.